God of Miracles – My Little Guy

I am not good at pregnancy. I know some women LOVE being pregnant, that is so awesome…wish that would have been my experience but alas it was not. I have some complications that make my body begin to contract 24/7 once the baby reaches a certain weight which is right around 6 months. No fun for the person cooking the little muffin. So when our youngest daughter turned 4 years old, my husband began making hints that he desired a son and wanted to try…. I was not a willing participant.

So after 2 years of hinting, talking, persuading, praying (Trev not me…I was stuck in my ways), God told me during my own prayer time, that I was to try for a baby and that He would bless us with a boy.               Ok, those are odds I can deal with.

I did not become pregnant for almost a year. It was extremely frustrating and was a whole ‘nother opportunity…to believe and have faith in God, for the baby He promised, when it just wasn’t happening!!  I can totally feel Sarah, and I was only waiting for a year!  How impatient we are sometimes!

So finally pregnant, we went to our doctor, the same doctor who was with me for our two daughters and she was so thrilled for us!  She immediately brought us into the sonogram room after the office “positive”. I was chattering away, this is normal Christina, Trevor was cracking jokes about how he had to talk me into it, and Dr. S. was strangely quiet all of a sudden….

“Christina, you have a perfectly formed egg sack but there is no baby. I have been looking and it is just empty. At 9-10 weeks I would see something. We need to schedule you for a D&C so that you don’t get an infection.”

WHAT?!?!?!?! My mind was reeling, I am looking at Trevor for help, I am feeling dizzy and I know that my God told me that we were having a baby….what the HECK is happening?????

Trevor very calmly asked a question, I have no idea what he said but I remember him asking at some point,

So reluctantly, because she was so sure, and didn’t want to get our hopes up, she said that we could take the hormone test. She told us to go now, and 48 hours later I would go and do it again. The hormones should be doubled if I am truly pregnant.

We left hand in hand and Trevor said, “We are not claiming this, God said that we were having a boy, and we are.” I took the first hormone test at the lab and we went home.

What I didn’t know was that my husband was bound by faith and holding onto God’s promise and he immediately called our pastor and bestest friends Jerry and Suzy. Jerry and Trevor set out to fast and pray in agreement that God would provide. And that is EXACTLY what they did. We had a leadership meeting and the leaders in our church laid hands on me and I so believed, there was just PEACE. Trevor didn’t even think or talk about the alternative.

Dr. S. called and asked us to come in after she received the 2nd hormone test result. She didn’t give us any indication of the answer on the phone. Now a little background on my doctor, she is Jewish. We told her the promise God made. She knew us personally after the last 9 years. She also didn’t hold much hope because she saw the perfectly formed empty egg sac 4 days prior.

So as we sat in the cold, white room, both lost in our thoughts waiting for the DOCTOR’S REPORT, we still believed our God was bigger. Dr. S. walked in and I couldn’t read her face at all. She sat down and opened the file and said,

“Christina, I am going to do an office sonogram again. Your test results came back but they didn’t quite double. This could be because your body is starting to reject the miscarriage. I just don’t want to get your hopes up unnecessarily.”

We walked over to the next room and I began to get prepared, looked at Trev and he was full of peace.  It calmed me.

Dr. S. squirted that cold stuff on me and began to take a peek.  The screen was turned away but I saw a smile turn up on her lips and I knew my God had come through.  There in the egg sac was my little guy jumping around 9-10 weeks old.

God’s hand had placed him there.

I had seen the empty egg sac, I have had 2 other daughters and been shown the heart beat at our initial doctor’s appointment.  There was no baby.  That I know for sure…BUT

Trev and I leaned on God, we held fast to that promise.  God hears the cries of His children, and He comes through.  We may not understand how or why He comes through the way He does, but He does.

Now my baby boy is 7 going on 8.  He loves God like no body’s business.  He is a worshipper, I smile when I hear him singing out to God. 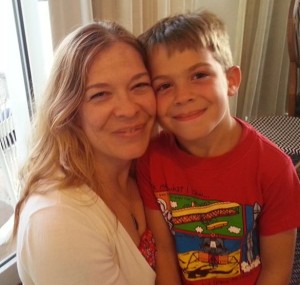 Just a couple days ago I had the pleasure of answering questions about why Jesus dying on the cross saves him (Micah) as we snuggled on the bean bag chair.  He knows the story, he can relate them verbally but he wanted to REALLY understand.  We talked about consequences and how Adam was perfect and would not have died but God gave him a choice out of love to be obedient and depend on God fully.  That when Adam decided he knew better than God and ate from the fruit of knowledge and became aware of good and evil (God’s knowledge) he realized that he was able and did sin (pride).  The consequence for sin is death.

We were not meant to die.

Because we all came from Adam, we are also sinners.  Our consequence is death.  There is no one that does not sin on this earth.  Jesus never sinned.  He would have lived FOREVER on Earth had he not been put to death on the cross.  Death was not deserved by him.  He chose to die.  He died because He remembered me and you…..He remembered when He would put Micah in my empty egg sack.

When He died, God was able to raise Him from the dead because death was an unjust consequence for Him.  Because He sacrificed His eternal life on Earth, He became the FINAL sacrifice.  No longer did we need to sacrifice animals to take on our sin as a scapegoat any longer.  As long as we believe Jesus’ sacrifice we are REDEEMED, RESTORED, RANSOMED back to God.  This is what Jesus has to do with me and you.  We cannot reach “holiness/perfection” without His sacrifice of blood covering our sin.

Thank you, Jesus!  Thank you that you are with me, thank you for the cross, thank you for your sacrifice.  I love you with all of my heart and I will not stop declaring my love for you and what you did until I find final rest in your arms.

A wife, mother of 3 punkins and a lover of my Savior. I want to share my experiences and walk with other working, Christian (or not Christian) mothers as I/we run the good race with all of its hurdles, valleys and mountains to encourage others. So get on your running shoes and let's get moving!
View all posts by Like an Olive Tree →
This entry was posted in Hope, Miracles, Peace and tagged Miracles, Peace, Trust. Bookmark the permalink.

2 Responses to God of Miracles – My Little Guy